Mother Ann and siblings Helena and Edith somewhere else

Initially attached to 3rd Cavalry ASC Ammunition Park (No 76 Motor Transport Coy. ASC). Thus a driver for Ammunition delivery. These Motor transport groups of the ASC had their own numbering scheme and so it becomes harder to track them as they were transferred between Divisions and indeed between ASC companies. For example the entry for the 76 Coy at states Pre-war. Ammunition Park for 3rd Cavalry Division. Later, became 7 GHQ Reserve MT Company. However, Army records show he was with 3rd and then 4th Calvary Division. I take this to mean (given the previous statement about 76 Coy) at an unspecified date William was likely moved to another ASC Coy (No 414) as his army service records indicate his service as; 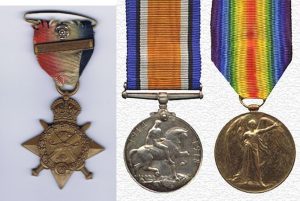 1914 ‘Mons” Star with Clasp, British, Victory medals and the rosette and clasp. The rosette to be worn on ribbon bar when the medal not worn.

There are 25 records in the National Archives for this man. For copyright reasons, they cannot be re-published.